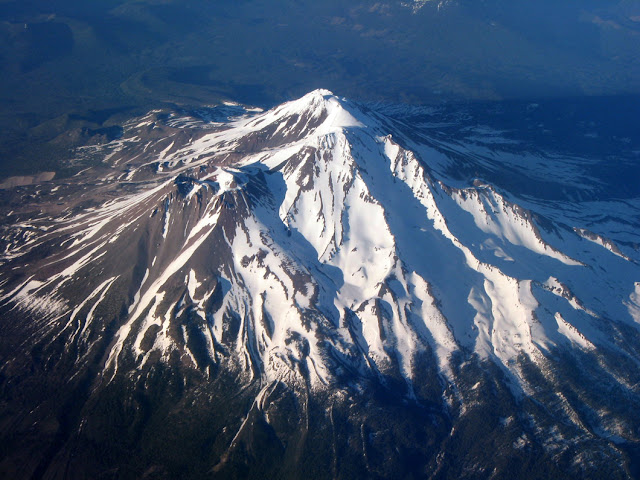 As the night wears on, the gentlemen of The Comstock Club continue their discussion that included (in my last post) revelation on Mount Sinai. With a question, the conversation shifts to Mt. Shasta in what is today's Northern California.

"Professor," Mr. Strong said, "we have heard about the Wasatch Range and Mount Sinai, shake up your memory and tell us about old Mount Shasta! I heard you describe it once. It is a grand mountain, is it not?"

"The grandest in America, so far as I have seen," was {Brewster's} reply. "It is said that Whitney is higher, but Whitney has for its base the Sierras, and the peaks around it dwarf its own tremendous height. But Shasta rises from the plain a single mountain, and while all the year around the lambs gambol at its base, its crown is eternal snow. Men of the North tell me that it is rivaled by Tacoma, but I never saw Tacoma.

"In the hot summer days as the farmers at Shasta's base gather their harvests, they can see where the wild wind is heaping the snow drifts about his crest. The mountain is one of Winter's stations, and from his forts of snow upon its top he never withdraws his garrison.

"There are the bastions of ice, the frosty battlements;

there his old bugler, the wind, is daily sounding the advance and the retreat of the storm.

"The mountain holds all latitudes and all seasons at the same time in its grasp. Flowers bloom at its base, further up the forest trees wave their ample arms; further still the brown of autumn is upon the slopes and over all hangs the white mantle of eternal winter.

"Standing close to its base, the human mind fails to grasp the immensity of the butte. But as one from a distance looks back upon it, or from some height twenty miles away views it, he discovers how magnificent are its proportions.

"For days will the mountain fold the mist about its crest like a vail and remain hidden from mortal sight, and then suddenly as if in deference to a rising or setting sun, the vapors will be rolled back and the watcher in the valley below will behold gems of topaz and of ruby made of sunbeams, set in the diadem of white, and towards the sentinel mountain, from a hundred miles around, men will turn their eyes in admiration. In its presence one feels the near presence of God, and as before Babel the tongues of the people became confused, so before this infinitely more august tower man's littleness oppresses him, and he can no more give fitting expression to his thoughts.
"It frowns and smiles alternately through the years; it hails the outgoing and the incoming centuries, changeless amid the mutations of ages, forever austere, forever cold and pure. The mountain eagle strains hopelessly toward its crest; the storms and the sunbeams beat upon it in vain; the rolling years cannot inscribe their numbers on its naked breast.

"Of all the mountains that I have seen it has the most sovereign look; it leans on no other height; it associates with no other mountain; it builds its own pedestal in the valley and never doffs its icy crown.

Mr. Brewster noted that "sunlight points with ruby silver and gold the mimic glaciers of the butte."
"It is a blessing as well as a splendor. With its cold it seizes the clouds and compresses them until their contents are rained upon the thirsty fields beneath; from its base the Sacramento starts, babbling on its way to the sea; despite its frowns it is a merciful agent to mankind, and on the minds of those who see it in all its splendor and power a picture is painted, the sheen and the enchantment of which will linger while memory and the gift to admire magnificence is left."

"That is good, Professor," said Corrigan; "but to me there is insupportable loneliness about an isolated mountain. It sames always to me like a gravestone set up above the grave of a dead worreld. But spakin' of beautiful things, did yees iver sae Lake Tahoe in her glory?
"I was up there last fall, and one day, in anticipation of the winter, I suppose, she wint to her wardrobe, took out all her winter white caps and tied them on; and she was a daisy.
"Her natural face is bluer than that of a stock sharp in a falling market; but whin the wind 'comes a wooin' and she dons her foamy lace, powders her face with spray and fastens upon her swellin' breast a thousand diamonds of sunlight, O, but she is a winsome looking beauty, to be sure. Thin, too, she sings her old sintimintal song to her shores, and the great overhanging pines sway their mighty arms as though keeping time, joining with hers their deep murmurs to make a refrain; and thus the lake sings to the shore and the shore answers back to the song all the day long.
"Tahoe, in her frame of blue and grane, is a fairer picture than iver glittered on cathadral wall; older, fairer and fresher than ancient master iver painted tints immortal upon.

"There in the strong arms of the mountains it is rocked, and whin the winds ruffle the azure plumage of the beautiful wathers, upon wather and upon shore a splendor rists such as might come were an angel to descend to earth and sketch for mortals a sane from Summer Land."
"You are right, Corrigan," said Ashley. "If the thirst for money does not denude the shores of their trees, and thus spoil the frame of your wonderful picture, Lake Tahoe will be a growing object of interest until its fame will be as wide as the world."
Posted by Glenn Franco Simmons at 12:11 PM
Email ThisBlogThis!Share to TwitterShare to FacebookShare to Pinterest
Labels: Bonsai Rock, C.C. Goodwin, Comstock Lode, Lake Tahoe, Mount Shasta, mountain, Mt. Shasta, The Comstock Club
Location: Mount Shasta, California, USA

Spam comments will not make it to publication, so please do not spam this blog. All comments are moderated. Thank you for your consideration.

This blog is noncommercial. No money is made from ads on this site, since there are no ads, and I do not request any donations.
While the genesis of this blog is my keen interest in The Comstock Lode and its history to the present, this blog will also explore more than The Comstock Lode-proper.
Topics will also include gleanings from the past and present that I find interesting in Carson, Eagle, Lyon & Washoe counties — and occasionally beyond. Recovery from a serious illness led to me taking time off from this blog, but in 2022, I will return to posting.